The Dorothy Days' painting of the week

My painting of the week for this week is 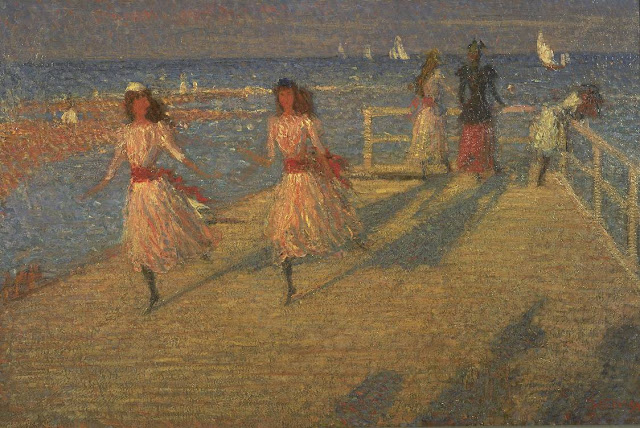 Philip Wilson Steer was a member of the New English Art Club (discussed in my previous blog post) and this painting was in the 1892 NEAC exhibition. Steer was born in Merseyside, England. He studied Art at the Gloucester school of art and also the South Kensington Drawing School but was rejected by the Royal Academy and went to Paris. The painting was revolutionary at the time and Avant Garde. This work has similarities with the work of the French Impressionist but places equal importance on the figures as it does the landscape.

The painting has similarities with the work of Seurat, a French Post-Impressionist painter who developed a style known as Pointillism. Pointillism is a technique which involves placing lots of small dots of pure, unmixed colour on the canvas. The idea is that from a distance the small dots mix together to form lots of different tones and form a complete picture.


The painting is of Walberswick Pier in Suffolk, England. Walberwick is a village and is known as a place with attracts residents from the arts, film and media. It was a place visited frequently by the English Impressionists from the NEAC. The painting shows two girls running towards to viewer on the pier. They were originally holding hands but this has been altered. However, if you look in their shadows Steer has left them holding hands with one another. Unlike many of the French Impressionist works this painting was not painted en plein air (outside on the spot) but instead was painted from memory in the studio. Steer captures the pier on a sunny afternoon.

I think the painting is beautiful, it was a wonderful sense of movement and I love the afternoon light as well.