We are now on countdown to The Dorset Team Christmas Fair! Just 9 days to go. I can't believe it has come around so quickly after being months in the planning. I am so excited for the event. In the past few days banners have gone up, flyers have been put into shops and through people's doors. We also received a rather large and exciting box from Etsy UK with goodies for the fair! Not going to reveal too much (you will have to come along to see!) but Etsy have kindly sent us some really great bits.

Been so excited to hear what different stallholders have been making. Donna from Little Vagaries has been making these beautiful illustrated stones which she draws free hand. Aren't they beautiful? Please come along to the fair to meet Donna and see her latest works. You can also see some of her designs on her Etsy shop here https://www.etsy.com/uk/shop/littlevagaries

Hope to see lots of you coming along to the Dorset Team fair, it is a fantastic way of support local independent businesses this Christmas. More information about the event can be found on the Facebook page https://www.facebook.com/events/1433547900231175/

If you haven't already noticed, the theme for this week's Style Saturday is polka dots! I am rather fond of polka dots and have lots of polka dot items scattered around my house as well as some polka dot jewellery. I really like the monochrome polka dots as it makes the fun pattern into something a bit more sophisticated. My favourite item from this collection has to be the box at the very top, it would be wonderful for keeping photographs and keepsakes in.

What are your thoughts on polka dots? Love them or loathe them!? Let me know in the comment section below.

P.S - If you missed last week's Style Saturday you can find it here! Enjoy :)
Posted by The Dorothy Days at 07:30 0 comments

Well if you have been looking on my Twitter account you would have seen I have some very exciting news to share with you all…..we rescued a 4 month old puppy! He is a beautiful apricot cockapoo with some behavioural problems and some aggression issues. He was very loved in his old home by his family but they just couldn’t cope and had 4 young children. He may look like butter wouldn’t melt in his mouth but he growls, barks and nips which was all too much with 4 children. We have taken him on and our work is going to be cut out but he is a lovely dog and very intelligent. Luckily because he is so young, with the right training all this can change and he can be the perfect pooch! When he is good he is very very good but when he is bad….not so much! I am hoping to blog about the process. 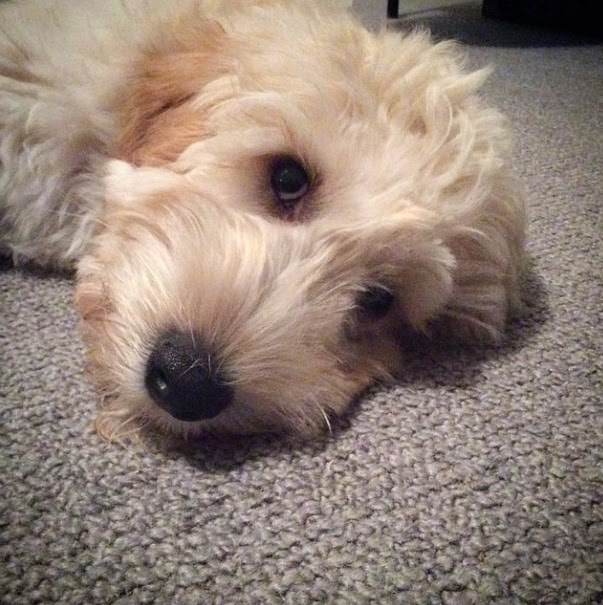 Day 1: After a drive which was meant to go AROUND central London but ended up going THROUGH central London we finally got to meet him! Smaller than I thought and fluffier. We picked him up with all his beds, toys and other bits and bobs (seems that puppies and like children and tend to come with lots of stuff! A whole back car full!) We thought he might be unsettled on the journey but he slept the whole way in his car carrier or played with his toys and seemed perfectly content. We stopped off at my sister’s house to give him a loo break and did get to see his first growls and attempts to bite. We then got stuck in rush hour traffic and a 1 hour 30 mins journey took over 5 hours (remind me never to travel out of London in rush hour again!). The first day was really hard and we had lots of incidences of growling and trying to bite us which is quite scary when it is a dog that you don’t know. Between this though he was the perfect dog and more than happy to sit and cuddle.

Day 2: He cried a lot of the night but did settle but then woke up early crying again and wanting to be let out. He needs lots of encouragement to do things, he is very nervous and unsure about stairs for example so getting him to go down them is quite a mission. He also does not like it when you try and take off his harness or put it on and this is when he tries to bite the most. He slept with it on last night as we unclipped it but he was too aggressive to remove it completely but we managed to remove it today and put on his collar instead. We have taken him on lots of walks to the park but getting him there is a slow process, he needs an awful lot of encouragement and does bark at people and sometimes growl as they go past. As the day went on, through and using positive reinforcement and distraction techniques this reduced. By the end of the day he was barely growling (a huge improvement from the previous day!) and even met some people in the park who stroked him without him biting and some other dogs and puppies. One of his problems is that he is so cute everyone wants to stroke him (particularly children). Not allowing children to stroke him at the moment as can’t risk him biting but we explain to adults that he is rescue and his problems and they are sympathetic and often do still stroke him which he has been fine about with 1 exception. He is super intelligent and I believe some of his aggression comes from frustration and boredom. In the day we managed to teach him paw and he already knows how to wee on command (!), sit, lie down and how to take a treat from you gently. He spent the evening snuggled on our laps.

Day 3: We have already fallen in love with him but weren’t too impressed by his 5am wake up call! We ignored his cries last night (hard as it was) so to teach him he needs to settle in his pen at night but 5am he needed the loo so we had to get up and let him out before he woke all the neighbours! We bought him a new toy yesterday which you stuff with food and treats so as I write this now at 6am he is trying his best to get some chicken out of the toy! We are speaking a trainer today for some more advice and going to buy some clickers to clicker train him. He is intelligent, learns fast and is eager to please so we are considering something like agility to try channel all his energy into something fun and positive. Also going to get a new harness and work to create positive associations with this harness as he hates the old one! Will keep you updated on how it goes!

The perfect collection for a lazy weekend in doing your Christmas shopping online! 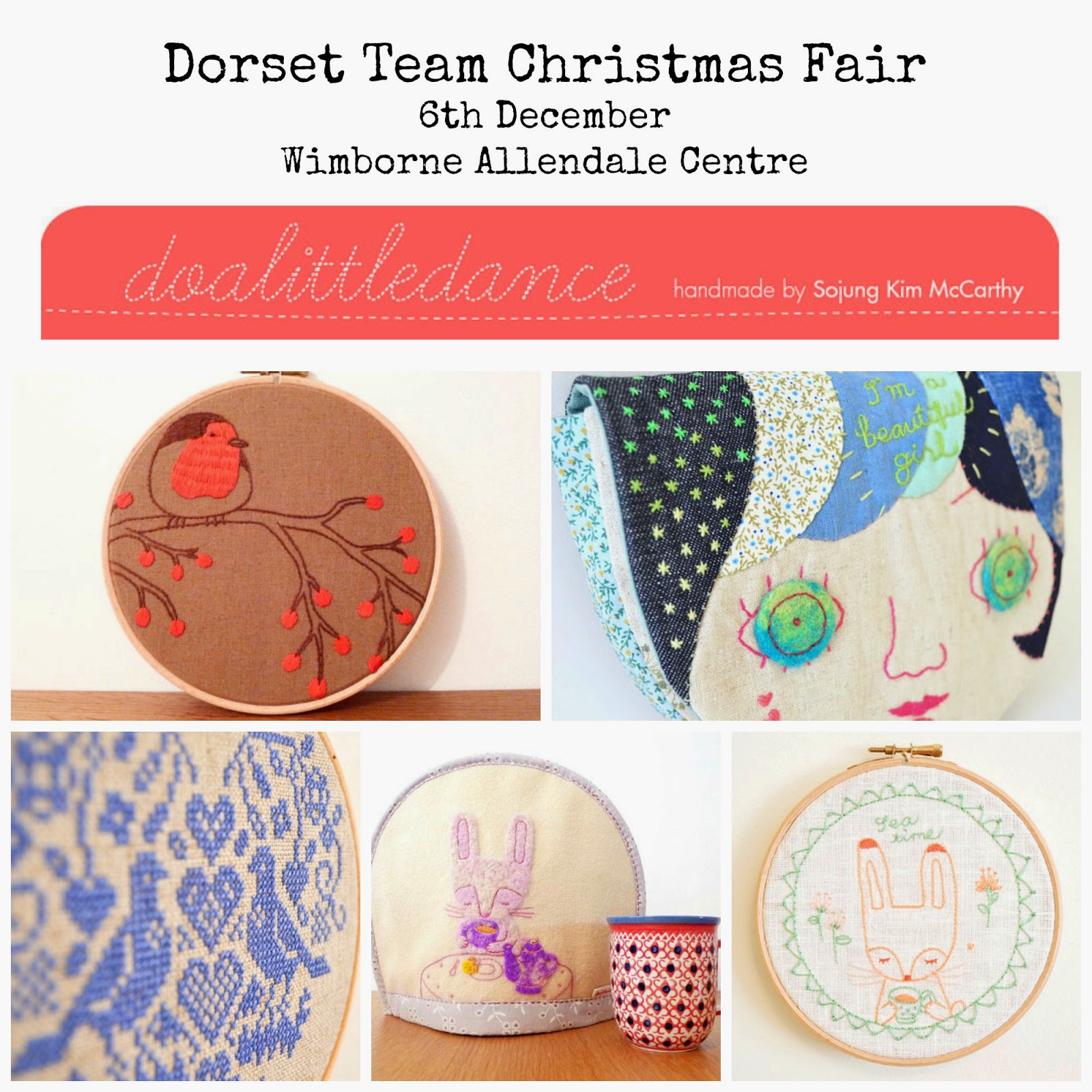 How are you all? Hope that you are all well. Have you got your head around it being November yet?! I don't think I have! Less than one month to go now until the Dorset Team Christmas Fair and time to share with you another stallholder who will be appearing at the fair. I hope you are enjoying these 'sneak peeks'. If you are in the area please do come along to the fair, it is going to be a fantastic day of Christmas shopping and lots of stallholders will be offering items for sale which they do not have listed anywhere else, some are offering special offers and it is a fantastic opportunity to see some of the talented makers and sellers in our area. I am certainly very proud to have some many talented local people coming to the fair.

Today I wanted to share with you the work of Sojung Kim McCarthy who runs Do a Little Dance (isn't that the cutest name?!). Her shop is adorable. I think I was sold the moment I saw tea themed items and tea cosies but I also love her bags, jewellery and embroidery hoop art.

The lovely thing about Sojung Kim's embroidery hoops are that they are light so would be easy to package up and send as a gift to someone and it would be a really unique gift that nobody else has one quite the same. Sojung Kim has not sold at one of our Dorset Team fairs yet so I am very excited to see her stall.

If you are local, please come along to the fair in Wimborne. It is on the 6th December 10am - 4pm. FREE ENTRY at Wimborne Allendale Centre. There is plenty of parking nearby.

I have been doing stallholder posts weekly since September, if you missed last week's post you can click here. The post features David from Beneath Bright Waters

Hope to see you at the fair!


Wednesday is not my favourite day... I know Monday's are normally the day in which everyone moans about but I tend to feel quite positive on a Monday as it is like a fresh start and a brand new week. Wednesday for me are instead always the "AHHH I haven't done this and it's already mid way through the week" kind of days. Today I spent the day catching up on emails and paperwork so when I stumbled across this (yes, I was being naughty and procrastinating!) it cheered me right up and made my day much brighter. The video actually made me cry in laughter, I love how his children are just sat there ignoring him dancing like it is an every day occurrence!

Hope that this video brightened your day a little too.

Thanks so much for checking out my blog.

Happy Monday :)  Normally on a Monday I share an inspirational quote to get the week started but today I thought I would share with you some art instead. I always find it nice to get up in the morning and have a few moments to relax, be quiet and have something to focus on and think about which is calming, really make a difference to a day. So today I am sharing with you all this beautiful work by Claude Monet.

Have a great week everyone!

Happy Sunday! Did you all have a wonderful Halloween? I hope so and a relaxing weekend after. I know that lots of you like to use Sunday as a day to unwind and relax before a busy week ahead and that lots of my followers have told me via Twitter that they also love to use Sunday as a day to make things and bake things! Today I thought I would share with you all a tutorial of how to make Raspberry Jello/ Jelly Cosmos for all of you who like to make things on a Sunday. Now that everyone is gearing up for Christmas I thought these would be idea for Christmas parties and the colour makes them really festive!

First of all, HAPPY NOVEMBER! Can't believe November is now here, that came around fast! Thank you to everyone who looked at my yellow and black themed style saturday

If you are reading this from your home studio or office please say a hello in the comments section below. What do you have in your office space to make it a nicer environment to work in?