I really like vintage medical/ science type stuff like this rather hilarious medical book page I found from the 1920s which I posted in a previous blog post. I am not sure why I like this stuff so much but I just do!! Please tell me I am not the only one ?! This week for my Vintage Thursday post I thought I would post this fabulous advert for Borsch and Rommel's Scientific Opticians which is from 1886. 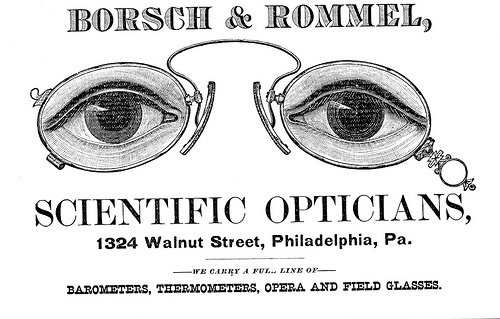 The glasses which are shown in the advert remind me a lot of my mother's lorgnettes. My mum unfortunately had skin cancer a few years ago and had to have major surgery on her face. This meant for many months she could not wear her glasses. My mother is ....as the saying goes.... is blind as a bat so this meant she could not read anything! This was really frustrating for her but was far too painful to wear normal glasses. A close friend of hers visited and cleverly suggested she buy a pair of lorgnettes instead so she could read. She bought a pair and they worked a treat so this vintage ad really reminds me of the ones which she had. She is now able to wear glasses again and is back wearing some amazing vintage glasses but still keeps her trusty lorgnettes in her handbag! They are even foldable so fold into a small round shape with the lenses on top of each other!