A while back I wrote a post on art to cheer you up on a gloomy day click here to see it I posted a photograph of the Wilton Diptych and said that I would write more about it in a future blog post. Today is another gloomy day. It is cold and I am sat in my room watching the rain trickle down my window so what better day to write you a post on what I think is one of the most beautiful works of art. 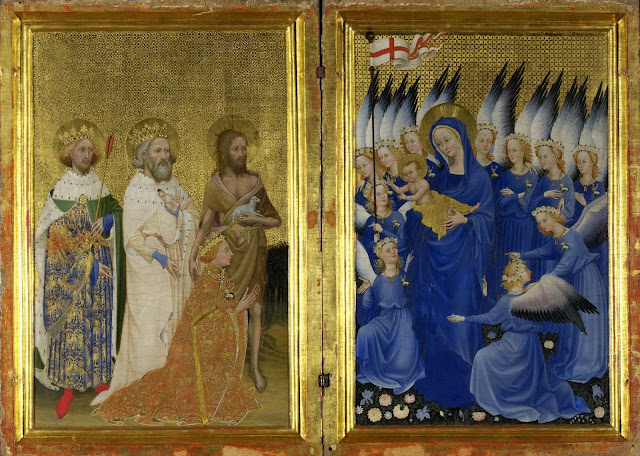 This painting is called the Wilton Diptych it was painted in c 1395-9 and is the National Gallery in London. It is one of my favourite pieces in their collection and one which I always go and see when I visit the gallery. It is also one of the first works of art which I went to see when I started studying art history and I remember being totally blown away by it.

I will try to write this blog post without going into too much but feel free to ask questions if you have any in the comments section below.


The Wilton Diptych - Whats in the name?

Diptych
A diptych is a painting or carving which has two panels which are hinged together in the middle so it can be opened and closed like a book. They are small scale so they can be transported easily and are often used as altarpieces. (If there are 3 panels it is called a triptych.) The Wilton Diptych is a diptych which was used as an altarpiece and would have been used for private devotion.


Who did The Wilton Diptych belong to? 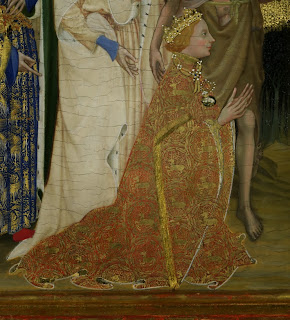 With this type of work (altarpieces for private devotion) the patron or owner of the piece often appears in the painting itself. This is the case with the Wilton Diptych and on the left hand side kneeling is the patron of this painting, King Richard II who was king of England between 1377 to 1399.


Who are the other figures in the painting?

Saint Edmund who was born in 841 and was King of East Anglia. He was taken prisoner by the vikings and when he refused to give up Christianity, he was executed. He can be identified by his arrow, which is reportedly how he was killed.

Edward the Confessor (1003- 1066) who was the last Anglo- Saxon King. He is buried in Westminster Abbey, London. A confessor is a male saint who has been blessed by not martyred. He can be identified by the ring he holds.

Always wearing ragged clothes and disheveled hair, this is Saint John the Baptist holding the lamb of God. 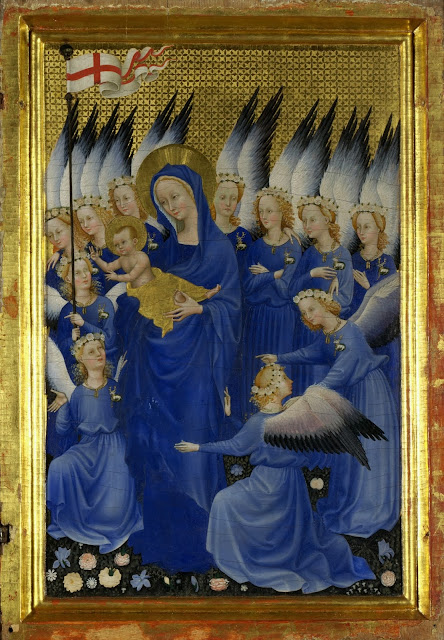 
King Richard II is therefore shown as being very pious and devoted to his faith by kneeling down before the Virgin, Jesus and the angels. He also makes associations between himself and the past Kings of England (both of whom were considered to be very pious) and also shows his importance in that he is being acknowledged by the holy family. 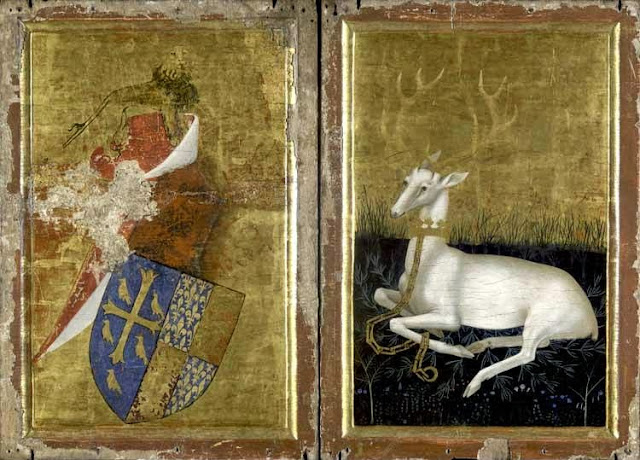 Above shows the reverse of the diptych. The white stag and the crest are both symbols of King Richard II. If you look closely on the opposite side of the painting with the figures you will find many more stags (for example in Richard's clothing)

I hope this has given you a little insight into one of my favourite paintings. I have tried to keep this post from not being too long (I could go on for pages about this painting!) but please feel free to ask questions in the comment box below and I will try to answer them.