A some of you know I have a really big passion for art and studied History of Art at university so I thought today I would tell you about one of my favourite painters....Titian. His work is absolutely amazing and we are lucky to have quite a few examples of his work in the National Gallery in London. I love going over there and looking at his work.

Titian was a 16th century painter who spent most of his working life in Venice, Italy after moving there aged 10. He trained under a mosaicist and then moved to the workshop of Gentile Bellini and later Giovanni Bellini; two well respected artists in Venice at the time (they were brothers).

He had a long career and enjoyed success both within Venice and internationally. His clients ranged from the church, Emperors, Kings and wealthy Venetian patrons. 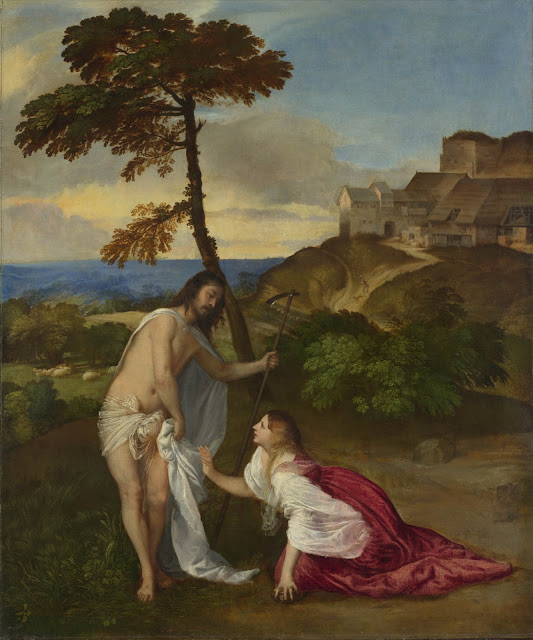 This work is one of Titian's early works, painted in c 1514, and you can see the influence of Giorgione; a artist who was working in Venice around the same time and was famed for his landscapes and pastoral moods. The title of the painting, Noli me Tangere, comes from the Gospels. It means 'let no one touch me' in latin, referring to when Christ went to heaven and was ressurected he did not want his followers to cling to his physical presence. The scene which Titian has chosen to depict is after the Resurrection of Christ. Christ has been crucified and entombed. Three days later Mary Magdalen finds Christ's tomb empty. She is shocked and tells the first person she sees, a man who she believes to be a gardener but he is infact Christ who appears to her (she is the figure seen on the floor) to comfort her. He was originally painted wearing a gardener's hat but this was altered by Titian. Mary Magdelene reaches out to touch Christ but he bends his body away from her so she cannot touch him. His facial expression is one of sympathy and concern for her. Christ appears in a ghost like form, showing his change from physical presence on the earth to the holy spirit. Mary Magdelene is diagonal on the floor. Her closeness to the ground shows she is strongly rooted in the physical world while Christ in contrast is standing and is closer to the sky symbolising his closeness to God and to heaven. This marks the shift between him being present physically on earth and him being present in spirit.

The figures are very harmonious in the landscape. The shape of Mary's body is curved and the line of her body continues up into the tree. The curve of Christ's body flows into the curve of the rocks behind him so together this forms an ' X' shape.

The landscape in which the figures are set in is very beautiful and atmospheric.The scene is set in the morning, so is true to the story in the bible. We cannot see the rising sun but can see the beams of light on the buildings on the right hand side so have the feeling of morning time. Behind Christ is a flock of sheep; a symbol of Christ's followers. The landscape is naturalistic and viewers at the time felt as if they could walk into the painting because of its life like qualities.

I hope you have enjoyed this post and learning a little bit about this wonderful painting. We are lucky enough to have it in the National Gallery, London so if you are local please do stop in and take a look at it (its free to enter the gallery). It is even more breathtaking in reality and when you can see all the little details.