It has been a long time since I wrote an art/art history blog post and this is something I really enjoyed doing on the blog and sharing some of things I know about paintings. I have spent the last few days trying to decide which painting to share with you all. I have so many favourites that it is hard to pick something but in the end I decided to write about this beautiful painting by Piero della Francesca called The Baptism of Christ. This was one of the first paintings I learnt about and I think it might even be the first painting I ever wrote an art history essay about!

One of the reasons I really love this painting is when I first started learning about it it really wasn't a painting that appealed to me at all. I remember thinking "well this is going to be boring". It wasn't a subject matter that I was particularly interested in or the style and I think I just thought it was going to be old and boring! But, the more I learnt about this painting the more I grew to love it. It was the first painting that I studied first and then went to see in the National Gallery in London and it actually gave me goosebumps!

There is so much you could write about this painting but I hope that this blog post will just give you a little taster!

What for and how?

The painting is tempera on panel (poplar). The painting was painted before the invention of oil paints so would have used coloured pigments (this was often ground up insects, semi precious stones etc) with a binder such as egg, honey, glue etc to make a paint. 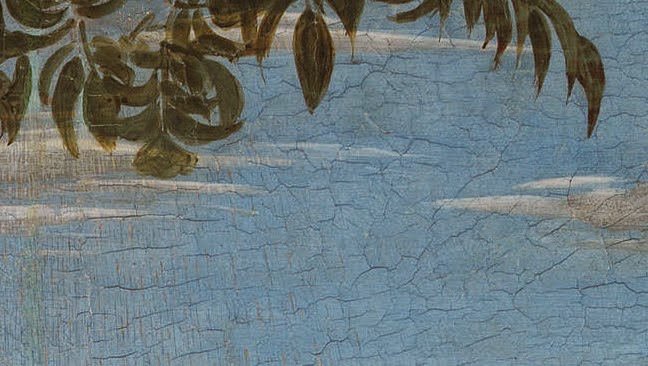 The painting was painted onto wooden panel. At the time, this was the most common way of painting. It requires a rather lengthy process to prepare the panel to be ready to be painted on including sanding, coating the panel and applying gesso (which is a bit like a primer).

Poplar wood was most commonly used in Italy for panel painting. The Mona Lisa is also painted on Poplar.

The painting was the central section of a polyptych (which is an altarpiece formed of many panels). The painting was commissioned by the Camaldolese abbey in Sansepolcro (his home town) for the chapel of Saint John the Baptist (inside the abbey).